“Put things where they go” is a basic notion within permaculture, a design philosophy that examines how nature solves problems. Permaculture explores how to work with nature rather than against it, and views environmental health as interconnected with human health. As our population has grown exponentially over the past decades, and climate change looms heavier with historic natural disasters and species driven to extinction, the implications can be overwhelming. One rewarding way we can take proactive action is through native plants. This can be as simple as cultivating them in a yard or container garden, or volunteering at a local park.

I was introduced to native plants through the latter effort. Previously, I could identify some plants, but might also pass through my surroundings without really seeing the distinctions among various plant matter – also known as “plant blindness.” I didn’t know whether a plant belonged to the region and benefitted it accordingly. Through volunteering with California State Parks Foundation, I learned that native plants are what is present in a landscape without any human impact. A common definition in the U.S. is “plants that were here before the Europeans arrived.”

These native plants co-evolved with local insects, birds, amphibians, reptiles and mammals over thousands, if not millions of years, forming the foundation of the food chain. For instance, the California sister butterfly only lays its eggs on oaks (genus Quercus), whose leaves provide food for the larvae. Hummingbirds line their nests with fuzz from the leaves of Western sycamore trees. Conversely, invasive plants, introduced from other places via human travel, provide little food or habitat.

Besides creating sterile environments for local wildlife, invasive plants compete with native species for resources like water and sunlight. They can even change soil chemistry. Therein lies the problem with the idea of “let nature take its course.” Once introduced, invasive plants can continuously degrade fragile ecosystems, but human intervention can help to restore native habitat.

California is special due to its biodiversity, or sheer scale of the variety of species that call it home (including its variety of humans!) The state has roughly 6,500 native plants, of which approximately one-third are endemic – found nowhere else on earth (at least not by natural occurrence). By contrast, some midwestern states are home to fewer than 1,500 native plant species. California is part of the Mediterranean climate zone, which covers 2% of the earth, yet accounts for 20% of known plant species globally.

Mediterranean climates typically host hot, dry summers and wet winters. While spring marks planting season in other climates, fall is the best time for Californians to plant, to leverage subsequent winter rains. Beyond just tolerating drought, native plants may go dormant during the summer months, with adaptations like curling their leaves under to minimize their surface area exposed to the intense sun. While this may not suit an English garden aesthetic, it’s a brilliant mechanism for these plants to survive and thrive as they evolve throughout the seasons.

Besides being beautiful (more or less classically so depending on the season) and low-maintenance, and supporting pollinators, native plants bring a variety of other benefits. Sunland’s nonprofit native plant nursery Theodore Payne chronicles an excellent list.

One idea I find poignant is despite the dense, sprawling development in my hometown of Los Angeles, even cultivated patches of native plants can provide “stepping stones” for animals to move throughout the city. The more species of wildlife that can move around, the greater variety and number of species an area can sustain. This species richness, or biodiversity, forms the basis of a sustainable food web.

In the attempt to move freely, some animals have met their ends on Los Angeles freeways. LA’s most famous mountain lion, P-22, is believed to have successfully crossed the 405 and 101 freeways to find a new home within Griffith Park. At eight square miles, this habitat is a tiny fraction of the 100 square miles that male mountain lions typically require. In surviving there for more than seven years to date, his adaptability validates the food web that has sustained him, from native plants on up to racoons and deer. Chances are sadly slim that P-22 would ever encounter a mate and be able to reproduce. However, his story has helped spur plans to build the world’s largest wildlife crossing.

Native plants remind us that nature is more often about cooperation than survival of the fittest. For instance, mycorrhizal fungi extend the reach of vascular plant roots to take in more nutrients, while the plants feed sugars and carbohydrates back to the fungi. This is one common example of many mutualistic ecological interactions. Collaboration yields strength, and defines the sustainability of an ecosystem.

To start incorporating native plants into your own space, it helps to look at any wild spaces in your neighborhood to see what grows. Working with the existing conditions, rather than trying to mold the conditions to personal preference, creates a ripple effect outward of harmony and ecosystem health.

This approach also embraces the distinct character of our neighborhoods – something to be explored and celebrated. When we default to exotic plants from chain nurseries throughout the U.S., we may meet a certain aesthetic, but make a barren impact upon the local ecosystem. This creates unnaturally homogenous landscapes across climate zones. Native plants reflect the inherent differences and variety that make places and spaces interesting.

For additional learning and inspiration, the Audubon native plant database enables searching by zip code to discover plants that belong to the birds and bees in your area. Once you’re ready to weed, plant, mulch, water and repeat, the infographic below shares best practices for California native plants. 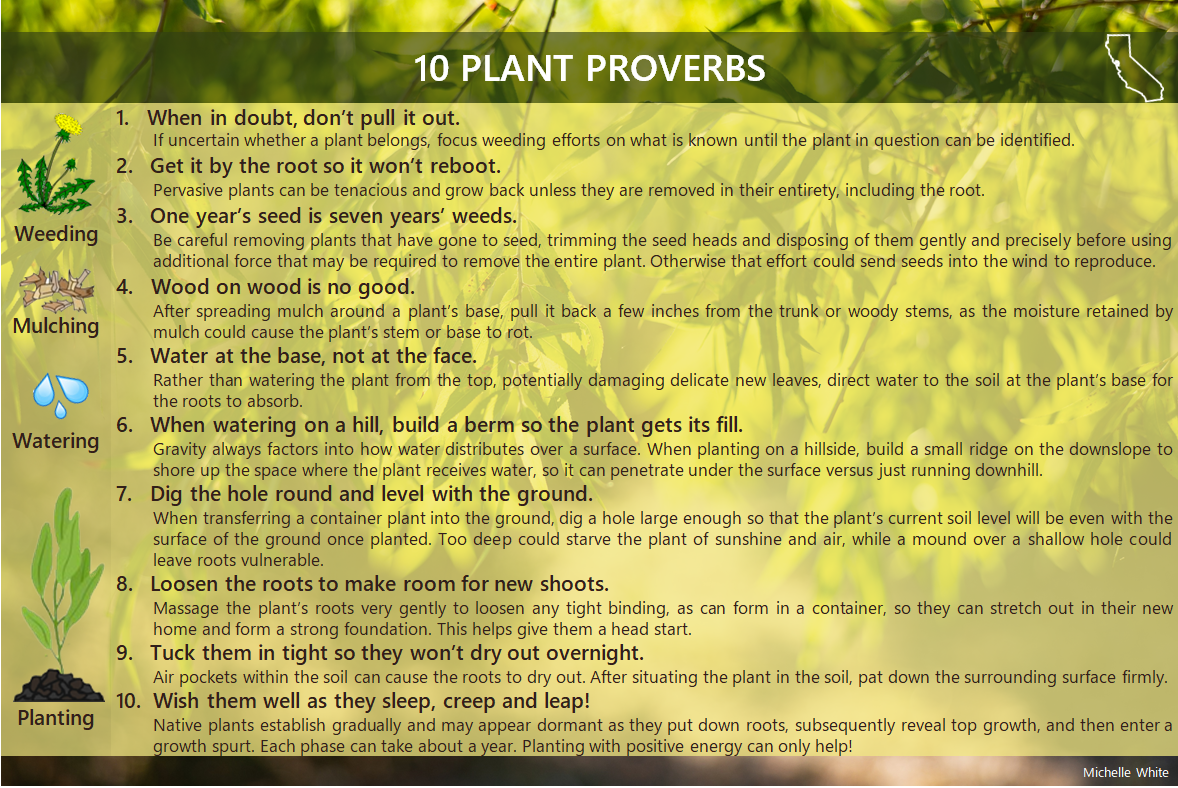