When my job recently summoned me on a business trip to Tampa, FL, naturally, I flew early into Charleston, SC (some 700 miles away, as my confused boss calculated), along with a like-minded colleague, to explore the indulgent bounty of the southeast. One of our South Carolina stops was the Angel Oak Tree, an utterly majestic, magical, massive, mystical oak estimated to be anywhere from 400 to 1,400 years old, although a friend we met at dinner the first night (Charlton from Charleston – no kidding), had cited it at 2,000 years old. As old as Christ! Details, details. I had never seen such an immense tree, and would have easily believed 2,000 years.

Awe set in as we circled the tree, capturing all the angles that we could with our cameras and cell phone cameras, debating which device best favored the languid late-afternoon lighting. Then, as in many a momentous setting, came the urge to strike a yoga pose. I tried plank floating alternating hands and feet off the ground, headstand lotus (picking old leaves from the ground cover out of my hair afterwards), and vashistasana with tree pose variation – had to find some tree parallel with this glorious behemoth of a background. I was just working into an eagle-armed, back-bending crescent pose, when an apparently-official woman came up to sternly advise us, “No activities under the tree.” 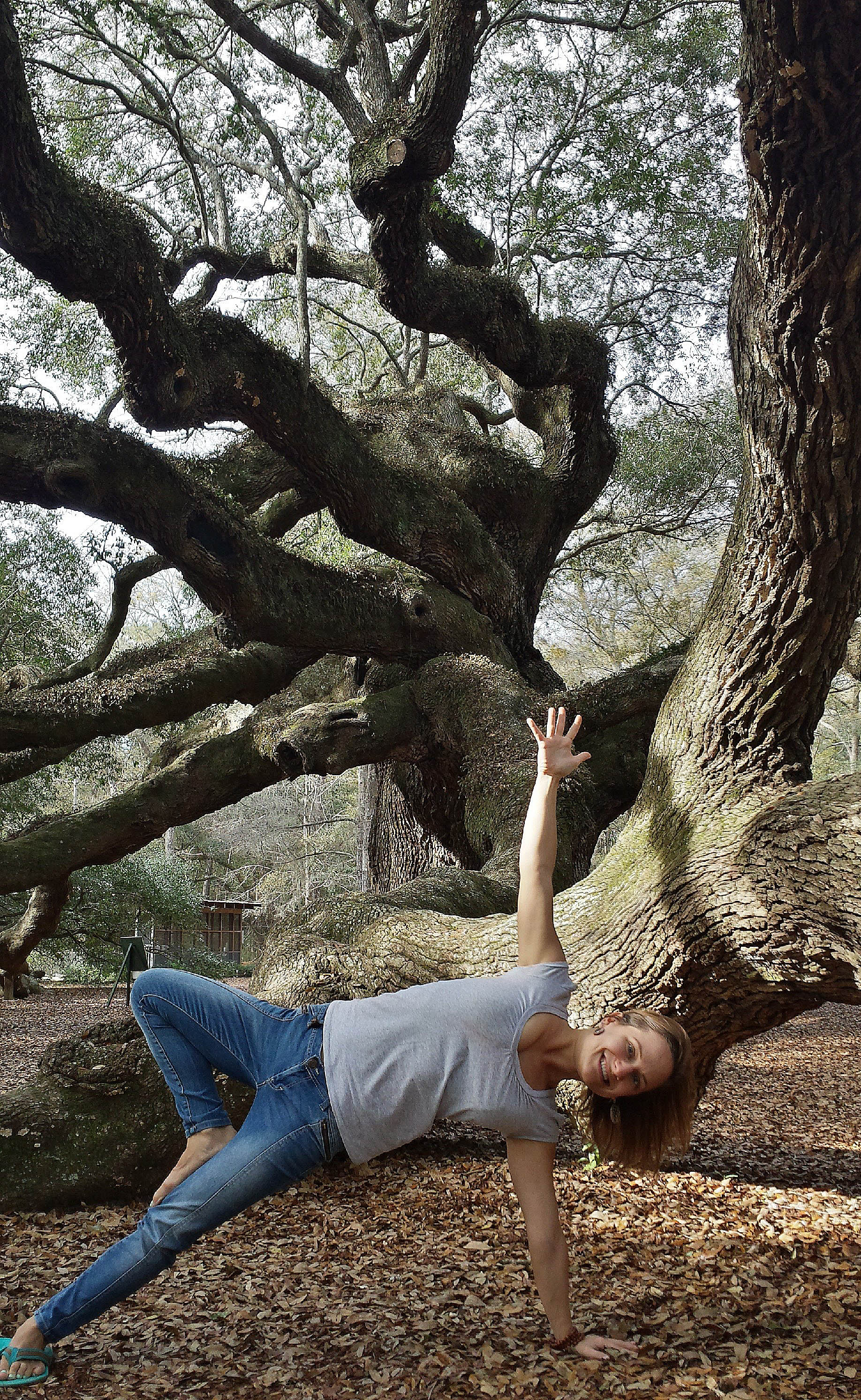 “Sorry?” we asked. “No activities, no yoga or whatever you call it. If you want to do that, go to the picnic tables way over there in the distance.” I was flabbergasted by this and unsure as to the source of this admonition. My perplexity grew further once I made my way to the other side of the tree and read a signpost of rules, which understandably included no touching, standing on the tree, smoking, etc. Why wasn’t this woman more concerned with the nearby kids I could see inevitably standing on the tree? I was certainly respectful and conscientious toward this great beauty, not touching or putting any weight on the tree.

I asked, “Okay, can we just take a normal picture, posing with no activities?” Standing like a rod, which got boring in 0.5 seconds. (I jest – certainly I was happy to have a ‘normal’ photo by the Angel Oak Tree and simply to see it in the first place.) But I wondered, when I saw someone standing under the tree with arms widespread – what’s the difference between that and perhaps inching a leg up into a most fitting tree pose? What if they had to scratch their knee with their toe in that moment? Where to draw the line!? (A question I frequently ponder.) Is it yoga if they move their leg up a little bit? Now it’s acceptable, now it’s not, now it’s yoga, now it’s not?

The most plausible explanation I could think of was perhaps it involved marketing (given all our social media and instantaneous Internet inputs) and condoning certain activities under the tree – Charleston Parks Conservancy attempting to remain neutral? I was actually pissed – perhaps my good-girl syndrome feeling rebuffed at what I felt was false or misled rebuking (this “rule” wasn’t even documented!) Of course, this pissedness is not very yogic of me. Not that yogis are doormats, but acceptance is a big lesson of yoga – mastering your response to what life throws you and breathing through angst, whether it’s your quadriceps burning in a deep chair pose, or off the mat, being pointlessly thwarted in essential self-indulgent photo-taking. 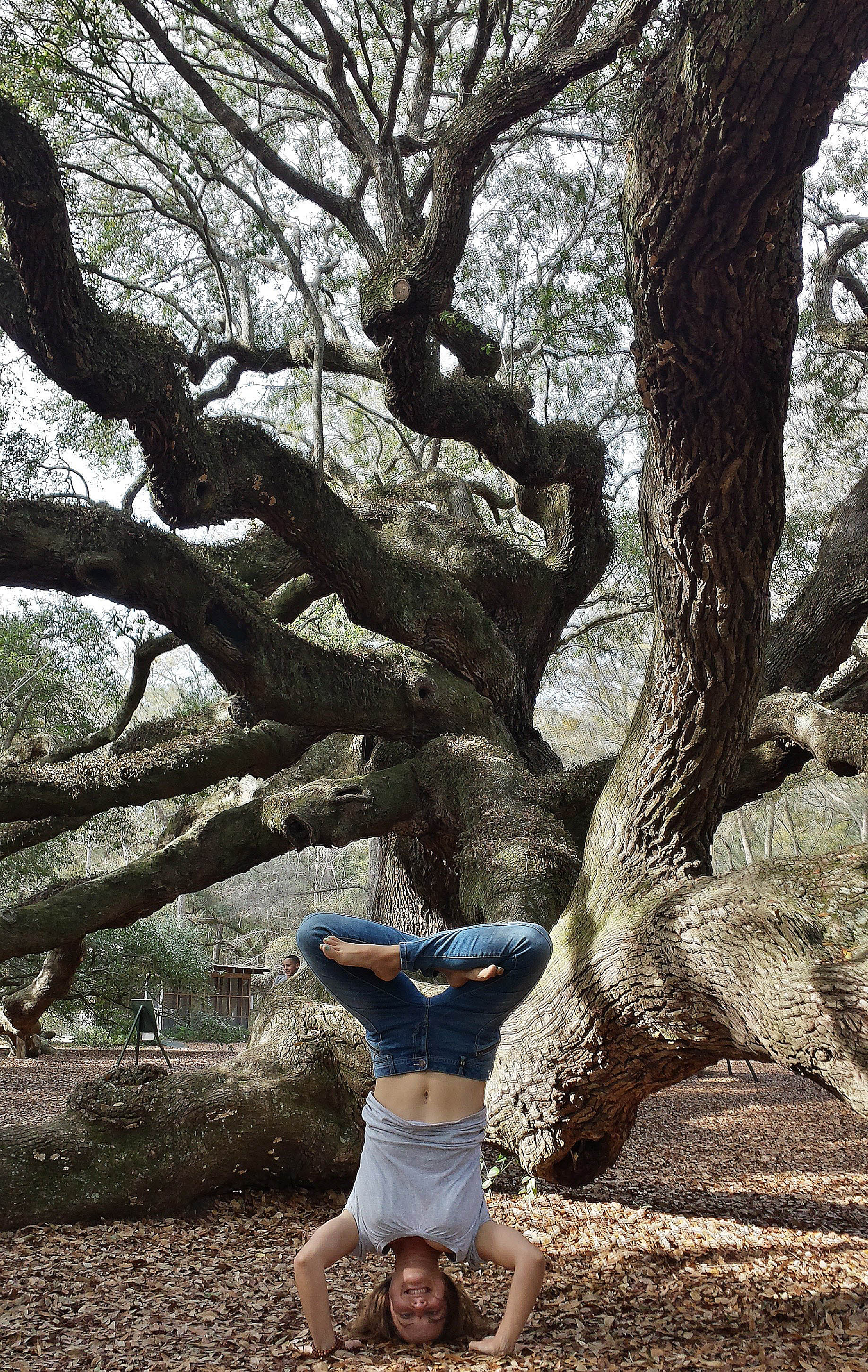 As to the underlying urge to do yoga poses in public places… well, it makes a momentous setting even more momentous. ‘Look at what I can do at this point in time!’ I won’t be doing that when I’m 80 – or, perhaps I will! And I generally prefer being behind the camera rather than in front of it. But this is one tendency of our social media age that I’ve adopted and don’t want to apologize for. I have planked on a cannon in the Musee d’Army in Paris (admittedly rather obnoxious), done a triangle pose in front of the Louvre, eight-angle pose on a castle wall in Essaouira, bridge pose on a small pedestrian bridge in Tahiti, mermaid pose in front of the Lily Pond in Balboa Park… What was so wrong with tree pose in front of the Angel Oak Tree? In any case, as a writer, I appreciate reconciling my emotions, especially the negative ones, through writing. Quite cathartic. I no longer want to harm that stern woman. So thanks for reading.

Ultimately, I was glad that we got most of our photos in before we were rebuked, and just grateful to see this mightiest of mighty oaks, and breathe some of the oxygen it helps produce. And at least one other Instagram member hashtagged under a similar idea – ‘#noactivitiesunderthetree’ – so it wasn’t just me. In solidarity… #yogaeverywheredammit #notinlaanymore #southernerscouldlearnsomething #hashtag