I have a confession. I have the sense of humor of a 12-year-old boy. Maybe younger, with how fast kids seem to be growing up these days.

Recently, seeing the name “Jimmy Johnson” on a business document made me smirk – that is what stood out to be, not the details that I was supposed to decipher and take action on. Austin Powers is still one of my favorite movies (cue the “Johnson” scene). I also just caught a TV program featuring Sicily, with host Andrew Zimmern describing and dining on local tuna testicles. Tuna testicles! Fascinating – not just because those exist(!?), but also, Sicily is the one place in the world where I have the most roots, from grandparents and great-grandparents prior to their immigration to the US via the ports of New York and New Orleans. I can’t wait to visit Sicily and eat everything. At least once.

But I’m not talking about tuna testicles today, because I want to talk about sesame balls. Sesame pistachio balls, to be precise. Seed and nut within one ball. Or however many balls you want to shape, mold and fashion with your own two hands, because these are finger foods. Packed full of protein, with five simple ingredients that mix perfectly.

Sesame seeds, pistachios, coconut oil, dates, and… I had the first four ingredients assembled in my brand new food processor, which I had just used for the first time. I opted to buy it after painstakingly making a raw cake crust of macadamia nuts and dates in tiny batches, in a grinder meant for seeds and coffee beans – TWICE, occupying far more moments of my life than warranted. Never again; I finally invested in a very reasonable purchase, and set out to process my ingredients in a logical, civilized fashion. Once I set my new food processor in place and witnessed it vehemently and INSTANTLY whirring leftover macadamia nuts ALL AT ONCE into coarse crumbs that I then used to coat fish, I was enthralled.

It was late on a weeknight (work night), but I pushed myself to cook since I needed to use up the fish. The excitement of the wonderful efficiency of the food processor gave me a second wind – I love firsts. I’ve noted this in my travel stories, and realizing how this applies just as fervently in my kitchen made me take pause. The first time holding a yoga pose that previously eluded me, or the first time seeing a treasured band are equally as exciting! More fodder for the blog…

At this point, I had already cooked macadamia-encrusted fish, and chicken enchiladas (I needed to use the chicken too). Since the food processor was already marked with macadamia residue, I thought I’d go ahead and make a quick batch of balls before cleaning the contraption for the first time (I was so excited, I missed the instruction to wash before use – very unlike me – oops). But where was my almond butter!? The fifth ingredient.

I had recently received a new fridge, smaller than the previous one, but frost-free and not leaking, unlike the previous one. So I was happy for the quick replacement, if concerned about the size. My lovely character of an apartment manager, a gruff, tough sexagenarian from Romania, told me, “You’re not cooking for a big family yet – when you have kids, I’ll get you a new fridge.” He made me smile, although I thought, with kids, I’d hope to live in a different setting! My east-side LA dwelling fits me perfectly for now, but just me. I’d want these hypothetical children to still be city-savvy, but have just a bit more room to roam.

So I had fit everything into my new fridge, but also had some items in the fridge at work, including, apparently, the almond butter. I recalled an idea to eat it with toast for breakfast at work – and I’d brought it to work THAT week!? In my increasingly tired state after a long workday, two meals cooked, cleanup ahead, and all but the final ingredient ready to go before I finished… I could not grasp how this pesky almond butter had slipped through my fingers.

Yes, I could have paid a visit to a supermarket just a couple blocks away, across a busy street. But the thought of trekking out into the cold winter night amid Hollyweird late-nighters did not appeal. And so I took a somber look at the contents of my fridge. I had dried cranberries. I had hemp seeds. I threw some of those in the mix, and then added a dash of agave to help bind the mixture, and then another because it was still lacking much binding. Some cranberries stayed mostly intact, but with some difficulty, I rolled the mixed-enough concoction into balls and stuck ’em in the fridge.

Cut to the next day. The balls were delicious! The cranberries and hemp made for a lightly sweet, nuttier, more complex flavor than the dense almond butter. I didn’t intend to take such a suggestive picture of just this nice pair, but had eaten and shared almost all the balls until I remembered to snap a photo. 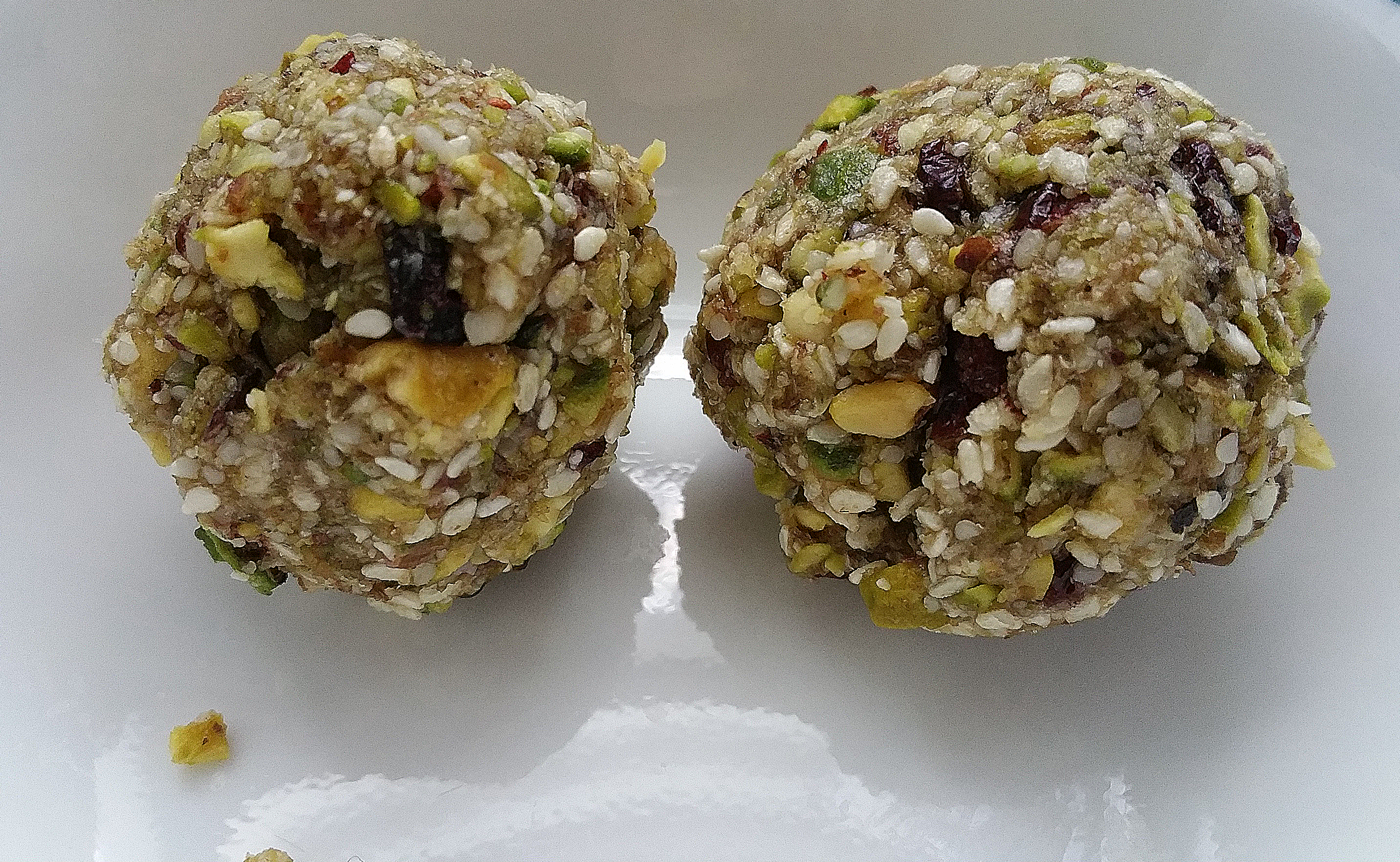 At the office, still somewhat peeved, I looked in my bag in the work fridge – NO almond butter. What!?

Cut to eventually getting home. I check the fridge again, and with fresh eyes, find the damn almond butter perfectly hidden behind crackers that probably shouldn’t be in the fridge anyway, but I put them there to keep them fresher. It was there all along. Grrrrr….. 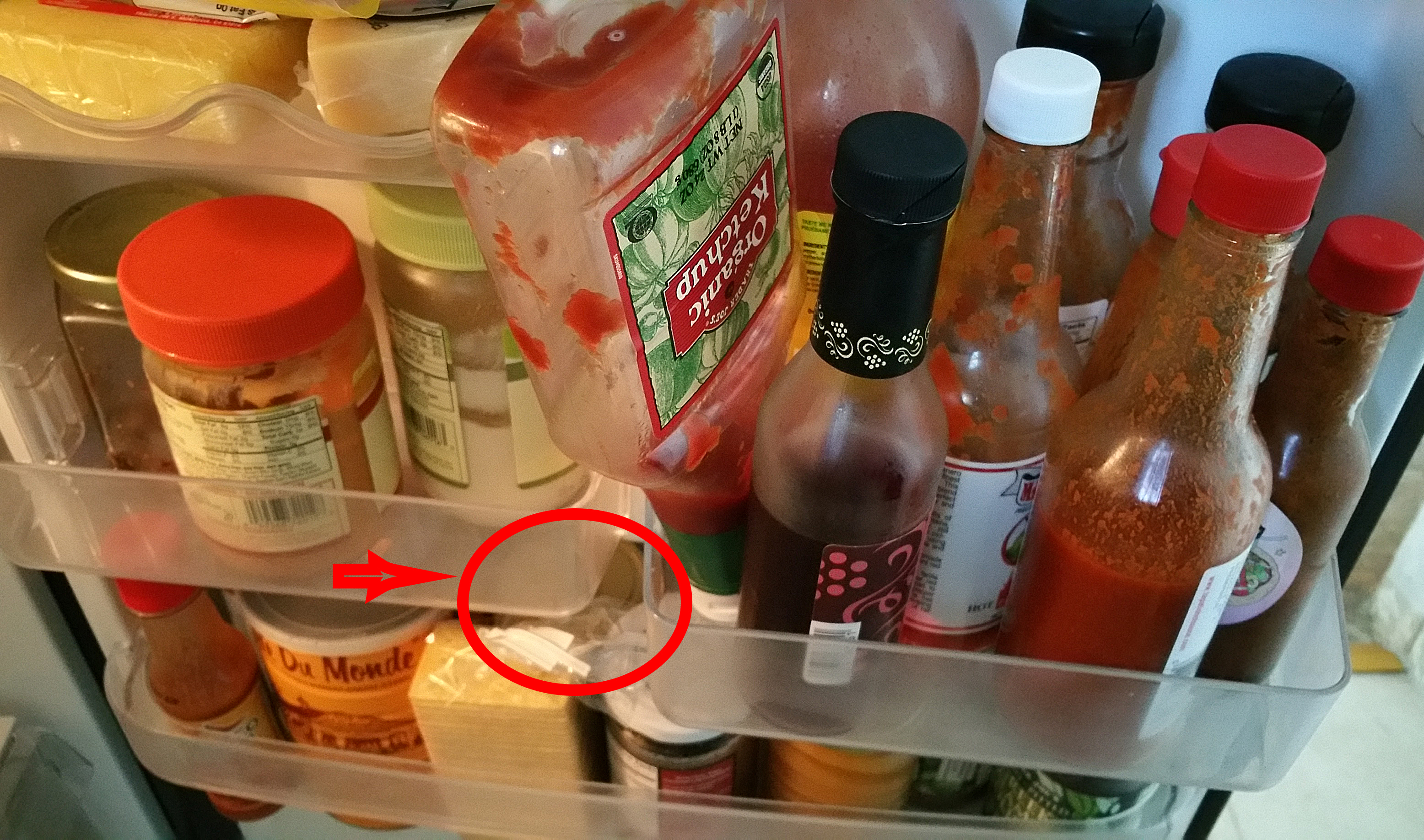 However, my improvised version turned out pretty great. It’s stressful when you don’t have everything on hand you thought you did for sesame pistachio balls, but remaining open and looking for alternatives can result in some tasty discoveries. There are always options. So I will close this post in gratitude for a fridge full enough that allowed me to improvise.

I did not conceive this recipe, so with appreciation for the author Karielyn: http://thehealthyfamilyandhome.com/pistachio-sesame-seed-balls/

If you want to make my version, swap the almond butter with a generous handful of dried cranberries, a judicious sprinkling of hemp seeds, and a haphazard dash of agave, and as confident a “what the hell” as you can muster. And be prepared to shape a bit more painstakingly.

And for those who haven’t seen them – tuna testicles do not look like balls.